Female writers might not be very famous during the difficult eras such as 18th and 19th century. Many of them couldn’t get enough exposure due to the pen name culture behind which they would hide and couldn’t reveal their true identity. However, some of the woman who stood strong for their work and that is the reason why their names are still alive among the relics of the dead. One of them female authors is Charlotte Bronte who is known for her all time success Jane Eyre. This is an autobiographical novel about a woman named Jane Eyre who grows up with many dreams in her eyes. She also grew up while loving a man about whom I am going to reveal things later. Today, I am going to review and summarize this book and free Jane Eyre e-book is also available at the end. 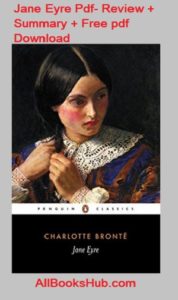 About the Author Charlotte Bronte:

Charlotte Bronte was an English novelist and poet from the 19th century. She was one of the three sisters who were known for their writing work for the field of literature. She didn’t left much but the work she did is still alive among the hearts of literature students and also common people. Her major success which got her worldwide recognition is Jane Eyre. She lived from 21st April 1816 to 31st March 1855 and died at the age of 39. She died young and left many hearts mourning her life. She used to work with the pen name Currer Bell. It was not an open tradition for woman to become authors and that’s why they had to work with a pen name. She struggled a lot in her life and left us with work which will be remembered forever in the shape of Jane Eyre.

This book is a conventional tale of a young child under the oppression of some relative. She is being abused and humiliated and her self-respect is in danger. However, when there is bad, there is good too. One of the maids working at her aunt’s home show her kindness and that builds up her courage. The maid sings her songs, and tell her stories to keep her busy and make her forget the pain. One day, during a fight with her aunt’s son, she is imprisoned. Unfortunately, this is the room where her uncle was found dead. While she is in the place, she sees her uncle’s ghost and screams and cries but no one comes for help. She later wakes up in the lap of Bessie the maid. People suggest her aunt that she should be sent to school and fortunately, she agrees.

Just while she thinks that her trouble are over when she is admitted to school, things get worse. The principal at her school is a racist and a cruel man. He teaches children to hate the poor students and that they don’t belong among them. He thinks that poor people should only be working for the rich. This makes her life even more difficult than it was before. She makes some friends while being there and Helen is one of them. She was the one she could trust, however, Helen does not turn out exactly what she though. She despised Jane but she had to live with her. Drama becomes more intense while the principal had to leave his job. The story is full of drama, hate, love, kindness, and all kind of social aspects that make a person strong or weak.

You are going to love the things that happen later in the story. It won’t be just to mention everything here and spoil your fun so get the book and stay ready for some awesome reading experience.

Charlotte Bronte was a real genius to write a book such as this. She faced many things in her life and she knew exactly how life works. How poor and weak are depressed by the rich and powerful. If you are someone struggling for a living then there is much to learn for you in this book. It will motivate you enough to face the challenges in life. We should never forget that doesn’t matter how long a dark night is, it is always followed by a brighter day. We don’t have to lose hope and work until it brings us success. Challenges we face in our life only make us stronger and these lessons are the beauty of this novel. You are going to find drama, love, hate and the characters that are written brilliantly by this genius.

It is not possible to take hardcopy everywhere with you. This is when the pdfs come in handy. To download the free Jane Eyre pdf follow the link below and start reading it on your laptop or smartphone.